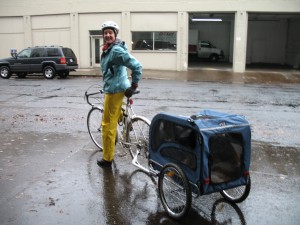 Last week Indi’s new trailer– The Xena 2000– arrived in the mail. It was given to us by Spirit Xena’s pawrents who live all the way in New York. It is such a special, huge, amazing gift for us and I am thankful to Xena’s Pawrents for passing it along, Tripawds for bringing us together, and The Universe for answering my call.

So. For the most part, trailer training has gone really well. Today Indi and I went on our fourth bike ride and she didn’t whine or bark at all. It helps that our trips have been to a great dog park in The Pearl called The Field. Yesterday Brad took her to his work meeting and she got pets and belly rubs by his colleagues all afternoon.

We went for a stoll the first day and she loved that. She took some coaxing to hop in and out of the trailer, but treats eased the transition. A lot. Unfortunately on the way home from our very first outing the stroller wheel broke! Totally lame. But the good people at Solvit are sending me a new one next week. In the mean time, it’s all about the bike.

The photos are from our first bike ride earlier this week. 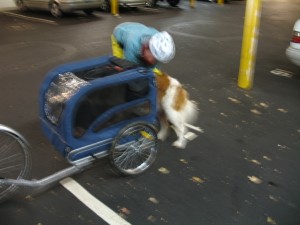 Going in after some treats, albeit cautiously. 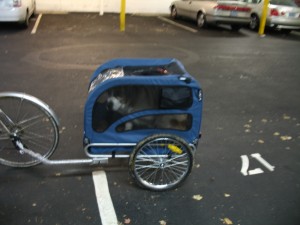