Act One: They Meet

The Salt Lake City Airport, a Ford Bronco, and a puppy. 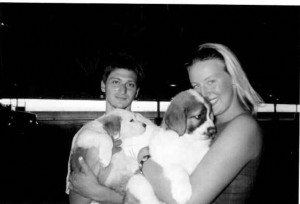 Yoni and Trauma, Indi and Raina

I met Indi on the fourth floor of the Salt Lake City Airport parking garage when she was 8 weeks old. I had just re-entered civilization after a two month long backpacking trip through the Utah desert. (Eight of us students from UC Santa Cruz backpacked for school credit.  Our backpacking leader was our professor. Our classes, held out on the trail, were nature writing, natural science, and geology.)

My trailmate Artemis’s Saint Bernard Sadie had puppies on April 1, 2002, and Trauma and I chose the two girls in the litter. (We all had trail names– Trauma earned his after he sat on a cactus and got stuck in quick sand.) As I walked towards the Bronco that brought the Saint Bernard sisters down from Rockland, Idaho where they were born I saw Trauma happily holding his puppy. I said, “Where’s mine?” Trauma pointed to the ground under the Bronco. I squatted down and looked under the truck and there was Indi, sitting directly under the center of the truck where no one could reach her. She was not happy. And she was not coming out.

Indi was under the Bronco for about ten minutes before she was finally coaxed out (or pulled, I actually can’t remember).  I went to her and picked up the softest, chubbiest puppy I had ever held. (Indi weighed 17 pounds at 8 weeks old.) I took a deep breath. Here we go, I thought, and felt a rush of adrenaline. Indi avoided eye contact with me and pouted.

The photo from our first meting on that Utah summer afternoon says it all: I’m glowing from the desert sun with bleached blond hair, smiling and feeling the excitement of becoming a new dog mom. Indi has a furrowed brow, is recoiling from the camera and has a look on her face that says, “I do not like this one bit.”

Despite our first meeting, our relationship grew into the most loving, important friendships of my life (my best human friend, Megan, is a close second). Indi is both my care taker and my dependent, my joy and my heart break.

Who would have guessed that such love could be born out from under a Ford Bronco on the fourth floor of the Salt Lake City Airport.

4 Responses to Act One: They Meet