Indi and the hot dog buns. 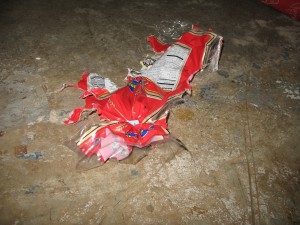 When Brad came home this afternoon Indi did not get up and greet him like she usually does. She wagged her tail and wanted belly rubs, but she would not leave her bed. Brad thought that was strange because when he walked in the door two hours earlier she was totally amped to see him.

He got worried, wondering what could have gone wrong in such a short amount of time. Then he saw it. May the reader please see Exhibit A: The destroyed, empty, hot dog bun bag, lying on the floor next to Indi’s bed, right by the kitchen table. 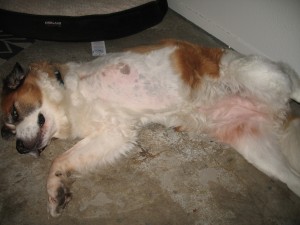 Exibit B: The new home of the hot dog buns.

May the reader now please see Exhibit B: The dog belly full of six Franz hot dog buns. Brad texted me to tell me what happened. I said don’t leave her, I’ll be home soon. By the time I got home forty five minutes later she was fine. She had a hefty belly ache for an hour, but thankfully it passed.

Indi’s new diet is basically the Atkins diet: meat, veggies, dairy. And she is hungry! She begs more. She scrounges at the park. She drooled at the feet of the painter eating a corn dog in our parking garage when I took her out with me to empty the trash. Even though it was recomended by my vet to put her on a grain free diet, I started giving her brown rice this week. I feel good about that decision, and I know Indi does, too.

14 Responses to Indi and the hot dog buns.