Welcome to the West Side 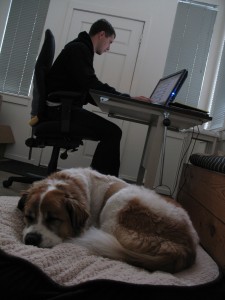 I have not written in a while, but I have a good excuse. We moved. It all happened so fast– where do I begin?!

Long story short (long, long, long story) our land lady gave us 30 days notice to move out of our house because she is putting it on the market. Then she had the house power washed and a DHS sign appeared in the front yard that read, “WARNING: Lead based paint work in progress. KEEP OUT”. To that I said, we are out of here. Two weeks later, here we are on the west side of Portland living in an art gallery with Brad. That’s right. An art gallery. With Brad.

Our new neighborhood, called Old Town, is very different from our old one, Irvington. Irvington was quiet and residential with tree lined streets, a big park, and houses built in the early 1900s. Our building in Old Town is right on the boarder of the fancy expensive arts district (The Pearl), the downtown business district, and the strip joint- homeless shelter- crack dealer district.

I keep my distance from the drug dealers, needles to say, but I don’t  mind the homeless people. They all love Indi. Just on our walk today one guy said, “She gets around just fine, doesn’t she.”  Another guy said, “You should tell people she lost her leg in a logging accident!” He went on to tell me that is what a buddy of his used to say about his tripawd. It was actually pretty funny.  And another crew that hangs out in the park says, “Hey, there she is!” every time Indi hops by. Indi pretty much ignores all of them.

The biggest challenge about the art studio is the stairs. Downstairs is the art gallery and kitchen, and the loft above is where the bedroom is. Indi can take the stairs just fine, but I want to limit the ups and downs for long term joint health. So far we are working on going  up at bed time and coming down in the morning, and that’s it. She really is doing so well, but I still worry. My days are consumed with keeping her safe and happy.

12 Responses to Welcome to the West Side