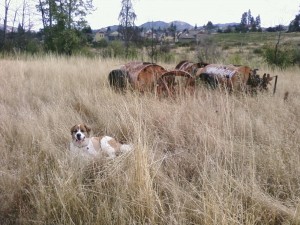 A tired dog is a happy dog

Last weekend we all got outa Dodge and went to stay at Megan and Adam’s house in Hood River. They were actually in Tahoe for Megan’s 30th brithday, but Callie was there. (We regretfully had to bow out of the Tahoe trip because of Indi’s surgery.)

Brad and I took the dogs to the field down the street and they played and played. I was keeping a close eye on Indi as she hopped through the tall grasses, ready to lend a hand if she got wobbly. But she didn’t need me at all. When Callie bounded off after a critter, Indi took off right behind her. When we got to the little creek with the plank bridge, Indi hopped across it like it was nothing– after stopping to eat some grass, of course. 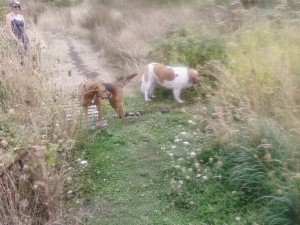 The dogs got to play in the field and the people got to play downtown. Saturday night Brad and I went out to sushi — fresh Oregon Albacore sashimi! Then we went to a cozy bistro for dessert– chocolate espresso tort, Fonseca port and manhattans. Yum.

6 Responses to Indi gets outa Dodge