Indi over the Rainbow 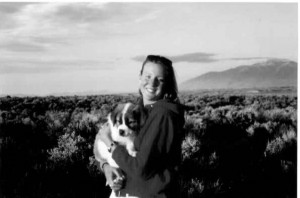 On December 17, just before noon, Indi left us for the other side. My heart is broken. Indi was my first dog, my first love.

In her final days Indi made it clear to me that she was ready to leave. When I got out of my head, out of the fear of failure and making the wrong decision, and into my heart, I knew it was time. She couldn’t walk or go to the bathroom on her own. Her bark was weak. During her last night she was up crying all night long because her digestive system was shutting down. The steak and potatoes and ice cream she so eagerly gobbled up the night before was causing her pain. She went blind in her right eye.

I am thankful that I had five days to say goodbye to Indi and to plan her parting. It was perfect. I got the week off work so I could be by her side 24 hours a day. We called Indi’s friends and said it is time to come say goodbye, and they all came. We called Dr. Chang who makes home visits, so Indi go to go in the comfort of our home. Her head was resting on my lap, my pink scarf wrapped around my neck and hers. Berkeley sat on our left and Brad was on our right. I was petting her and talking to her the whole time. I told her she was a really good dog and she did a great job of taking care of me. I told her it was okay, she could go now, I was going to be okay, and we loved her so much. She went calmly and peacefully.

With Indi’s head still in my lap I closed my eyes and I saw her, right in front of me. She was smiling and panting as if she had just been chasing squirrels at Fernwood Park. She seemed to say, phew! I’m outa that heavy, broken body! She was ready to go but she was checking in with me one more time. I said, you can go now, Indi, I’ll be okay.

Later that day I told Brad I was doing better than I thought I would. He said, of course you are, you are strong. And at that moment that I had a big AHA: I am not strong, I am supported. And I am supported because I know how to ask for help. My partner, my friends, my doctor, my colleague, and my spiritual guides all had a hand in supporting me through that terrible week.

Indi came into my life when I needed her. She walked me through my twenties and I was never alone. Now I’m thirty and entering the next phase of adulthood. I guess you could say her work here is done. I know she is chasing squirrels and drinking from mud puddles over the Rainbow Bridge. I know I’ll heal with time. And I know I will never have another dog as beautiful and important as my Indi.

20 Responses to Indi over the Rainbow